How we did it: The rebuilding of the Iraqi Social Forum following COVID-19

INTRODUCTION
Voices from the South, February 2022

Around the world, social movements are renewing and rebuilding after the devastating effects of a global pandemic and major global change.  This includes groups like the “Iraqi Social Forum” (an open political and social space where movements, organizations, and individuals who share a progressive agenda can gather together in Iraq), who were forced to re-think their work in the face new national and global challenges.

In this month’s “Voices from the South,” we hear from Mahmoud Alhiti and Batool Kareem of the secretariat of Iraqi Social Forum. Mahmoud and Batool tell the story about the steps the ISF took in order to set a new course forward following major challenges of the pandemic and social unrest.  Their experiences provide some insight into what other movements in the world might learn from the ISF when it comes to mobilizing for social change in the “new normal” the world now faces. 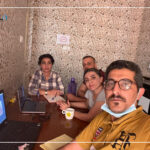 The Iraqi Social Forum emerged in 2013 as an open space for the movements, organizations and individuals in Iraq who believed in social justice and human rights.   The ISF was built on principles of pluralism and diversity, where there is no room for discrimination based on economic and social status, nor discrimination based on gender, race, nationality, origin, color, religion, sect and belief.

The challenge of the pandemic and social unrest

The ISF continued to grow and flourish until 2019 and 2020, when the Iraqi society and the Iraqi civil society in particular faced grave and unexpected challenges.

In 2019, a series of wide popular uprisings took place in Iraq that resulted in large-scale protests that filled the streets and spread out in the sit-in squares. The people demanded their legitimate rights and were determined to change the form of the government that had previously ruled Iraq within the frameworks of corruption, sectarianism and crime.

Yet, activists and the entirety of civil society were put under a lot of risks and restrictions from political parties and armed groups threating civil activities and activists.   A number of the forum’s activists were arrested and released later after being investigated without any clear statement or memorandum stating that they were guilty of a clear violation of the law.  The forum faced severe pressure in all its joints, and the activities that were planned were halted.

The Iraqi Social Forum had the hope of returning in 2020, yet the whole world collided with the COVID-19 pandemic and the severe preventive measures that were imposed by this pandemic. This included a comprehensive ban on public gatherings in cities in Iraq, commitments to social distancing, and quarantine. This pandemic was a reason for stopping all activities, including everyday civil activities on a large scale in Iraq.

The combination of many months of pressure from the authority, the pandemic, and all of the challenges these things bring – activities stopped completely and the ISF was forced to announce the postponement of all programs and the closure of the space of the Iraqi Social Forum in the hope of return and recovery.   This challenge has opened up the eyes of the world on a new reality in which we had to cope and think in new ways to allow us to keep going.

All our processes were halted, we at the Iraqi Social Forum were very keen on maintaining and strengthening the ties with our fellow partners and fiends through solidarity and compassion.  We therefore reconnected virtually and held most of our activities online in spite of all of the challenges that aroused with the usage of the internet (including relative illiteracy present in civil society circles, the challenging of consolidating the digital world and its impact on the ground, the deterioration of Internet services in the country, and lessening enthusiasm towards electronic interaction as the pandemic continued).

The efforts of the new secretariat focused on re-establishing effective communication with all the forum’s joints in Baghdad and the rest of the cities, recovering from the Corona virus pandemic, and early planning for the implementation of the sixth season (edition) of the forum.

Small steps towards a restored vision

We thus began to the process of restoring the spirit of one of the most important and largest social and civic events in Iraq, which is the activities of the Iraqi Social Forum seasons.

The secretariat worked instantly on reactivating the ISF’s many paths (programmatic areas) – including the Education path, Women and Equality path, Education path, Minorities and Cultural Diversity path, Social and Economic path, and Water and Environment path. In addition, we took careful steps to reactive local forum and in all 12 Iraqi cities.

We utilized the hard time of the pandemic to begin looking towards the future by working on the internal structures of the forums, and building the capacities of the activists working within.  We also strategizing new means for sustainable communication and activism in this new reality.

We have also worked on planning the implementation of the activities of the sixth season of the forum.  We endeavored to link the outcomes and lessons of the major challenges we have faced (the 2019 protests, the October uprising, and the reality of life in the time of the pandemic) with the themes and focus of the new season (edition) of the forum.

The 6th Iraqi Social Forum was then organized in late October and early November 2021, and served as practical embodiment of the past two years of careful rebuilding and past 8 years of work and struggle.

We began with two continuous days of self-organized workshops, seminars and dialogue sessions, in which hundreds of professors, academics, activists and specialists enriched the discussion, and witnessed good international participation compared to the situation in which we live and share with the rest of the world.  There was active participation by international solidarity groups who provided messages of support and assistance and a desire for joint action.

There were four major topics focused on during the (human rights, non-violence and peace building, environment and water, women and equality), and these were distributed among 57 seminars and dialogue sessions.  The sessions were organized by dozens of organizations involved in and outside the Forum movement.   On the closing day, the 5th edition of the Baghdad Marathon for Peace was held alongside the “Another Iraqi Is Possible” Festival.  These events concluded a season of the forum that was rich in intellectual and cultural aspects, that highlighted the demands in terms of the issues it raised.

This season of the forum carried the slogan “Security… Rights…Change”, a slogan with even stronger meaning to our movements in light of the demands on rights, freedoms, citizenship, democracy and social justice over the past years. The outbreak of the Corona virus epidemic also imposed a new reality, as well as difficult humanitarian conditions that the current political systems and their moral references have not been able to protect.

The Iraqi Social Forum and all of our “paths” aim to strength the values of citizenship, to guarantee rights and freedoms, and to struggle for social change and a new Iraq.

We need this now more than ever in the new normal.

Subscribe
Feb 25, 2022 at 07:57
Newsletter
Updates and analyses from our partners