What frontline communities need from the UN Climate Change Summit (COP26: Inside advocacy)

INTRODUCTION | Part II of a two-part series
Voices from the South, October 2021

In early November, governments from around the world will be gathering in Glasgow, Scotland for the annual climate talks hosted by the United Nations (“COP26”).   This summit is seen as a critical moment for climate justice, as the Intergovernmental Panel on Climate Change (IPCC) reports that time is running very short to halve greenhouse gas emissions necessary to limit global warming to a 1.5°C increase.

While some activists from the global South have gained access to these significant climate negotiations, a majority of South voices are left out due to lack of vaccines and impossible logistical requirements for traveling in a pandemic.  There is a definitive need for South voices (especially those living on the frontlines of climate change) to be heard on a global arena related to the future of the planet.

In this month’s “Voices from the South,” we offer a two-part text from movements in the global South mobilizing towards COP26 through different means.

| Part I (link here) is a text from the “Southern People’s Action on COP26” that profiles the efforts of those movements who have not been able to travel to Glasgow and who are mobilizing in the streets.  Through their “outside” advocacy work, the campaign mobilizes trade unions, farmers, women, fisherfolk, indigenous peoples, youth, and environmental and climate justice movements in the Global South to send a clear message from where they are to those in Glasgow:   Stand up NOW for climate and social justice.

|Part II (below) is a text from Ivan Phell Enrile, climate justice program manager at IBON International in the Philippines.   Ivan writes on the “inside” advocacy work of South movements that have gained access to the COP meetings, and the policy demands that they will be working for in Glasgow.   Ivan presents the concrete policy changes that frontline communities most affected by climate change need from the UN Climate Change Summit, and argues that there is a need for a systematic change where people and the environment are at the front and center of development. 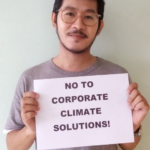 Ivan Phell Enrile is the climate justice programme manager of IBON International, based in the Philippines

From October 31 to November 12, Parties to the United Nations Framework Convention on Climate Change will be meeting in Glasgow, Scotland for the 26th Conference of Parties. Following the Intergovernmental Panel on Climate Change’s (IPCC) warning that the world is on the way towards breaching the 1.5 degrees Celsius global warming limit in just two decades time, there is so much anticipation as to what this year’s climate talks will deliver especially for communities the frontlines of rising weather extremes.

What are the sticking points at the COP26 negotiations? What are the peoples’ priorities and demands for climate justice?

How the carbon budget (an estimate of the total quantity of CO2-equivalent emissions that can be allowed to stay within the Paris agreements targets) will be allocated between developed and developing countries has been a long-standing debate in the climate negotiations. Which countries need to reduce or bring to zero their emissions? Which countries need to use the remaining carbon space for the development needs of their people?

The answer is that those who have built their wealth on fossil fuel extraction should take the lead in reducing emissions and support the most affected to adapt to climate change impacts and transition to sustainable development pathways.

But according to a civil society report, historical emitters are not going anywhere near the amount of emissions reductions they should undertake. In contrast, many global South countries are meeting or even exceeding their fair shares.

Furthermore, many of the pledges on the table are based on net-zero scenarios that allow for continued or even increased pollution, assuming that carbon capture technologies will be developed in the future to compensate for their emission. A successful COP26 should result in developed countries committing to a rapid and drastic phase out fossil fuels, not net-zero targets by a distant date and that rely on unproven and risky technologies.

…those who have built their wealth on fossil fuel extraction should take the lead in reducing emissions and support the most affected to adapt to climate change impacts and transition to sustainable development pathways.

No deal on climate imperialism

Countries signed the Paris Agreement six years ago, but a few sticky issues remain unresolved, including the rules of implementation of Article 6 of the agreement: a little-known and highly technical section of the Paris Agreement that deals with carbon markets and offsets.

Indigenous peoples and human rights groups have warned that carbon offsetting is a possible gateway for a new era of climate imperialism. In Uganda, at least 22,500 people were driven away from their homes to give way to a carbon offset tree plantation by the UK-based firm New Forests Company.

There is increased pressure for COP26 to conclude negotiations on the Article 6 rulebook. A no deal is much better than a deal that can potentially undermine climate ambition, fails to deliver tangible benefits to the atmosphere, and violates the rights of indigenous peoples and vulnerable communities.

Achieving the Paris Agreement temperature goal of 1.5 degrees Celsius is impossible without transferring huge finance from the Global North to the South. At COP15 in Copenhagen, developed countries committed to mobilise USD 100 billion of climate finance for developing countries per year by 2020. More than a decade later, only a fraction of this promise is being fulfilled.

Not only are developed countries failing to meet their funding obligations. About 80% of climate finance comes in the form of loans or private finance instead of grants. For communities crippled by debt and burdened by the pandemic, increasing debt further hampers their resilience and deepens the injustice.

It is vital that developed countries pledge a new public, grants-based climate finance and agree on a concrete plan to deliver a minimum of USD 500 billion to developing countries between 2020-2024. COP26 should also acknowledge that economies need to mobilize trillions of dollars, rather than billions when setting up the new public climate finance goal by 2025.

For climate finance to have credible impacts, it should be reoriented towards the needs of frontline communities. Mitigation presently receives most of the funding, but adaptation is a matter of survival for frontline communities. A separate finance mechanism for loss and damages is also critical to delivering reparation and solidarity to communities for lives and livelihoods lost because of global warming.

Substantial reforms are also needed so that climate funds reach people at the local level. According to a research, less than 10% of funding committed under international climate funds is directed at local communities. Evidence shows that climate finance reaching the local level – as part of a coherent approach to climate action – delivers effective, efficient, and sustainable outcomes, enhancing the impact of mobilised funds.

A patchwork of policy reforms, however, will not suffice to get us out of the crisis. We need system change where people and the environment are at the front and centre of development.

By democratising ownership and control over productive resources the wealth and benefits will be redistributed and reallocated for peoples’ needs, not monopolised by developed countries and large corporations. Democratising ownership also entails the payment of reparations and the removal of unjust economic and trade policies that stunt developing countries’ growth and ability to adapt to climate change.

When people and communities are at the helm of social governance and planning, they become officially and materially empowered to ensure economies meet human needs in ways that redress social and environmental injustices, including economic, racial, colonial, and gender-based oppression. Civil society will soon be holding mass actions around COP26 in Glasgow. Movements in the global South that cannot go to COP26 because of lack of access to vaccines and impossible logistical requirements for traveling in a pandemic, on the other hand, will hold local mobilisations as a show of defiance and solidarity with all frontline communities including in the global North. All these efforts are made not because of the belief that COP26 will deliver the justice and change demanded by frontline communities but to foreground peoples’ struggles and visions for a more resilient, just, and carbon-free world.

Click here to read part I of the series: “The social and climate crisis (COP26: Outside advocacy).”

Subscribe
Oct 25, 2021 at 09:06
Newsletter
Updates and analyses from our partners